Alternating current is a type of electric current which often switches its direction in a back and forth motion, therefore bringing about a reverse in voltage due to the change in direction of the current. AC current is known to change its polarity 120 times per second and a reversed polarity in the AC causes a deeper penetration to the object undergoing welding. The frequency of alternating current is often 50Hz to 60Hz which often depends on the country of residence.

Long distance transmissions are often done within high voltages thus reducing current and loss in transmission. Alternating current also allows a convenient shift from one voltage to another and this is made possible by the fact that current often switches its direction in a back and forth motion.

Direct current likewise makes it possible to transmit power over long distances and in the event where alternating current is available, it can easily be converted to direct current for transmission. However direct current is considered more efficient especially when the distance of transmission is less than 100 feet. Working with direct current is also deemed to reduce the risk of hazards that are often brought about by shocks. This is made possible by the fact that the voltage produced is below 48 volts, thus making it safe for individuals handling the electrical equipment’s.

AC welding is ideal for welding magnetic metals which cannot be done by DC welding. AC welding is used in welding downhand heavy plates, aluminium TIG with high frequency and fast fills. The primary advantage of AC welding as compared to DC welding is that it allows the welder to weld magnetized materials. The current changes in direction in AC current is not affected by magnetism, therefore it is easier to control the arc as it remains stable.

AC welding is a commonly preferred method in seam welding which is often used in shipbuilding. This is due to the fact that the current settings are much higher than those used in DC welding. Therefore a much deeper penetration of the metal is achieved. It is also used in TIG welding aluminium since AC supports welding at higher temperatures.

Old Machinery often have rusty areas which may be a point of concern due to the amount of heat that the machinery will be exposed to. AC welding promotes a higher heat penetration as compared to DC welding thus ensuring that it does not affect the piece of machinery.

DC welding produces a smoother welding and there are fewer chances of spatter due to the direct current produced. It also produces a stable and constant arc which makes it more reliable and easier to handle as compared to AC welding.

It is therefore vital for a welder or the individual handling the welding equipment to carry out an extensive research on the materials to be used and their current condition in order to choose whether alternating current or direct current is ideal for the task at hand. This is due to the fact that using incorrect current may result to lack of arc control, overheating, excessive splatters and at the same time quick burning of electrodes. 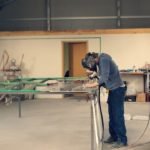 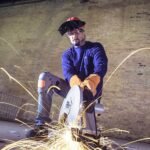 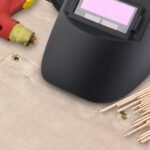